Doctors from NEC were invited by Samaa FM 107.4 to talk about epilepsy on their popular morning show. The show is heard by children on way to school and people to work all over Pakistan. This program is heard in other countries too. The feedback of the listeners was very encouraging.

Large sized banners with epilepsy awareness message were place on several pedestrian bridges strategically located on the main traffic artery of Karachi that connects the national highway to the Karachi port and branching to reach other parts of the city. These posters were legible from a distance of 700-800 meters.

At National Epilepsy Centre, lucky draw activity for children with epilepsy was held. The winner got a large stuffed teddy bear.

A press conference was held after dusk at a popular public space, Port Grand located near the Karachi port. The place was beautifully lit up in purple – the colour of epilepsy. The media personnel were briefed about epilepsy and the importance of spreading awareness by the EAP President who also Co-Heads NEC. The Govt. of Sindh was represented by the Assistant District Commissioner, South. A short awareness documentary and recorded messages of President NEC and ESP, Executive Director, Jinnah Postgraduate Medical Centre, Karachi and President ILAE were also shown. 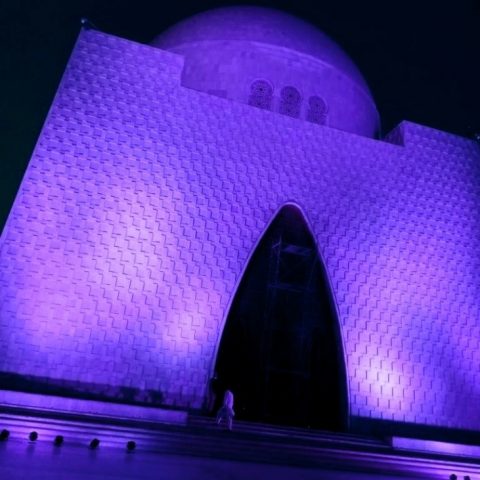 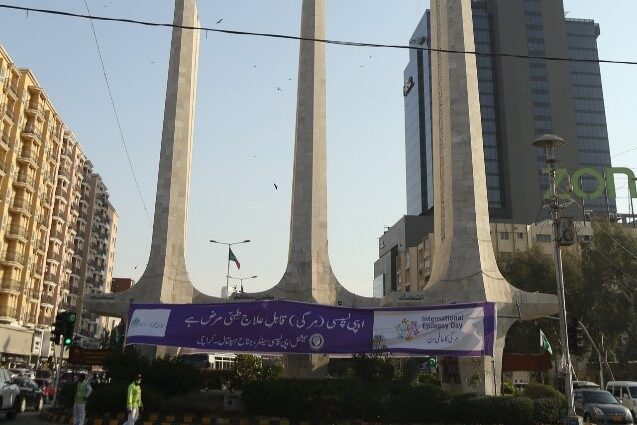 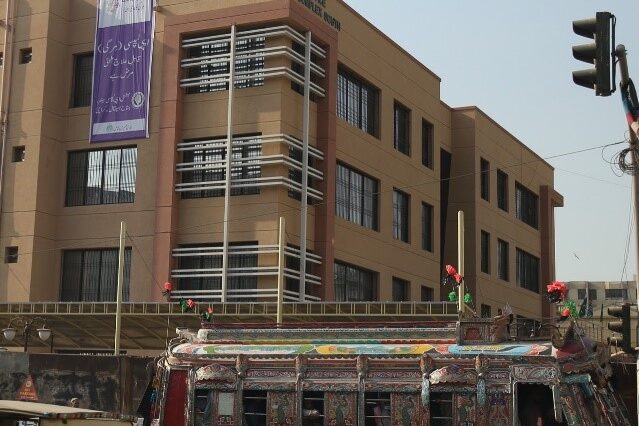 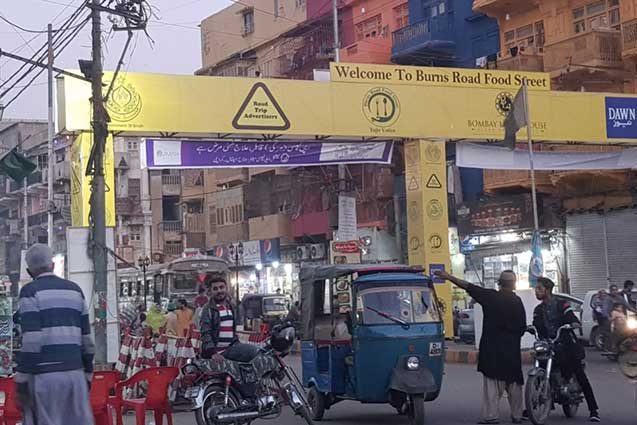 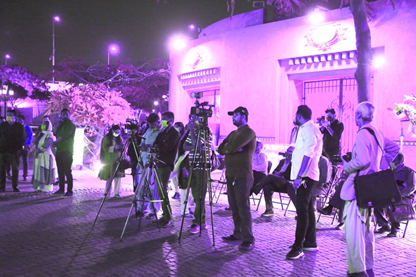 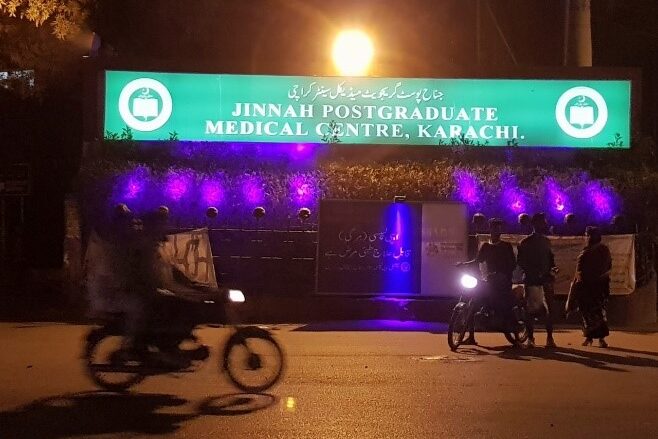 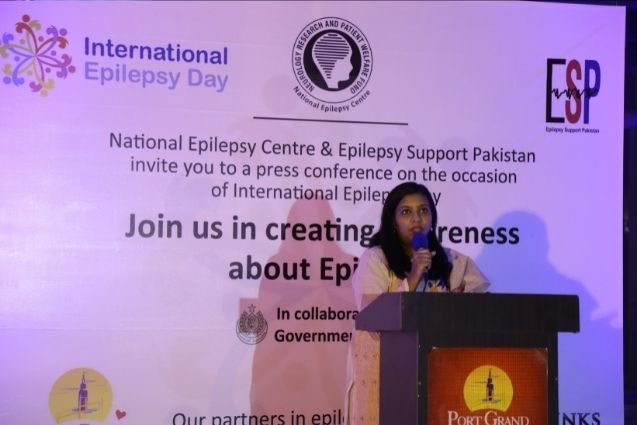 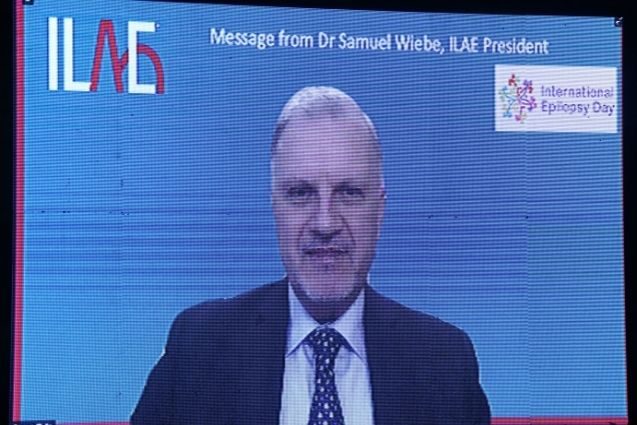 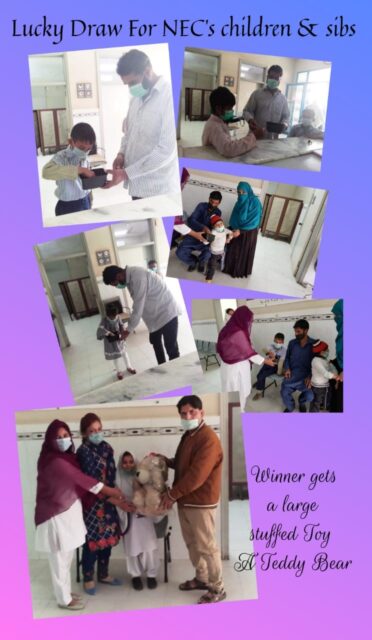 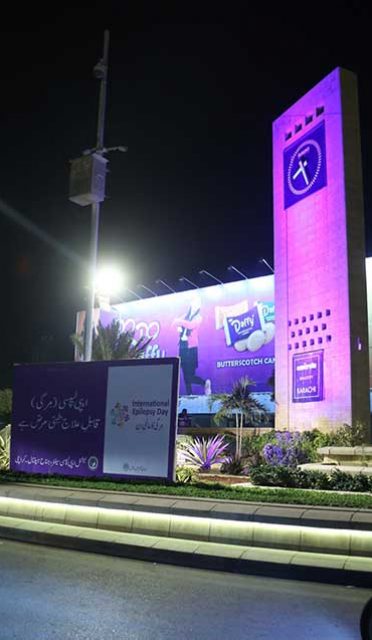 Lecture on ‘The 2017 ILAE Classification of Seizures and the Epilepsies’

A lecture on The 2017 ILAE Classification of Seizures and the Epilepsies was arranged in collaboration with Epilepsy Association of Pakistan, ILAE’s Pakistan Chapter. Prof. Sameer M Zuberi, Chair, ILAE Commission on Classification & Terminology 2013-17, Consultant Paediatric Neurologist & Honorary Professor, Royal Hospital for Children, Glasgow UK gave an elaborate talk which was followed by Q&A by the enthusiastic participants. First of the lecture series on epilepsy diagnosis and management for Final Year students, who are the future health care-givers was held on 18th Feb,2017 at Jinnah Sindh Medical University. About 250 students participated. 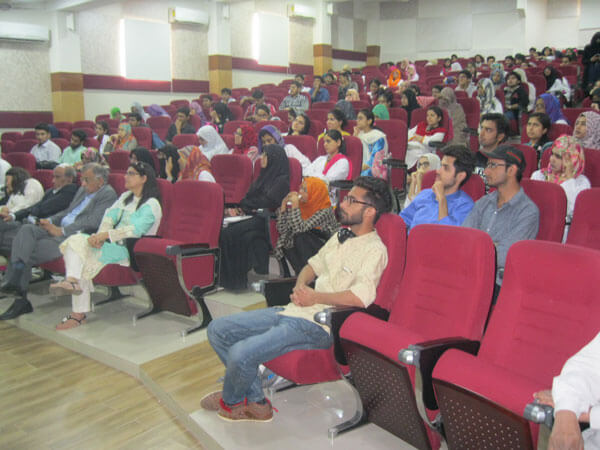 Epilepsy Day was celebrated on Feb 13, 2017 by holding a Public Awareness Seminar in collaboration with Mir Khalil-Ur-Rehman Memorial Society (Jang Group) at the Najmuddin Auditorium, JPMC. Patients with epilepsy, their caregivers, medical care-providers and people from all walks of life attended. This seminar was dedicated to (Late) Mr. Abdul Sattar Edhi who had epilepsy and championed the cause and was an inspiration to the people with epilepsy. Highlight of the awareness seminar were people with epilepsy talking on a public platform about their life with epilepsy; their trials and tribulations and how they overcame it to become high achievers and lead a normal life. Wide and detailed media coverage all over Pakistan of the event further enhanced the awareness. Awareness through FM Radio bill boards and posters was also done. 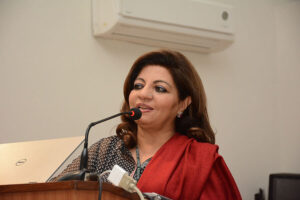 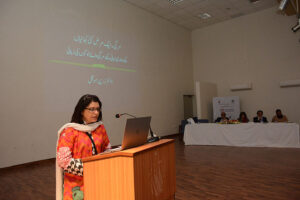 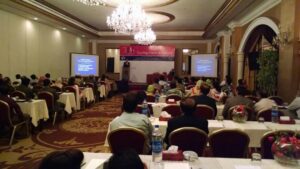 WE NEED
YOUR SUPPORT

Lack of awareness, misconceptions, stigma & marginalization cause more misery than the condition itself. With medical, social & psychological treatment, public awareness to change the public mind-set is necessary. National Epilepsy Centre (NEC). Karachi, operational since 2012 is the only tertiary care centre in Pakistan exclusively for holistic epilepsy treatment, education, research and public awareness.
Be a Part of Donation Drive 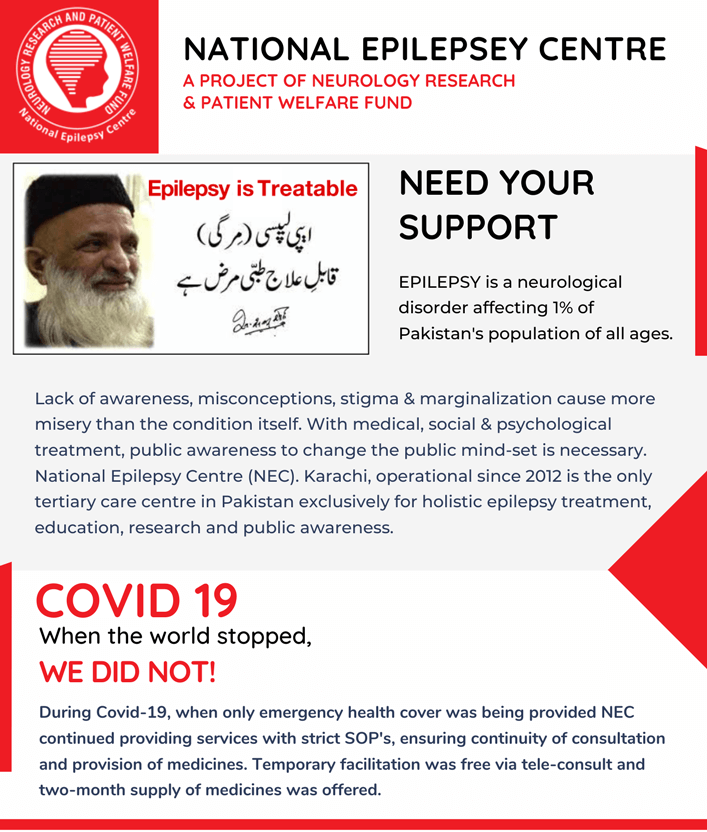 Our landmark paper, Epilepsy treatment gap and stigma reduction in Pakistan: A tested public awareness model was published in a reputable medical journal in end Dec 2019. The paper was received with accolades from entire medical especially neurology community for its groundbreaking approach towards reduction of treatment gap in a poorly resourced country.